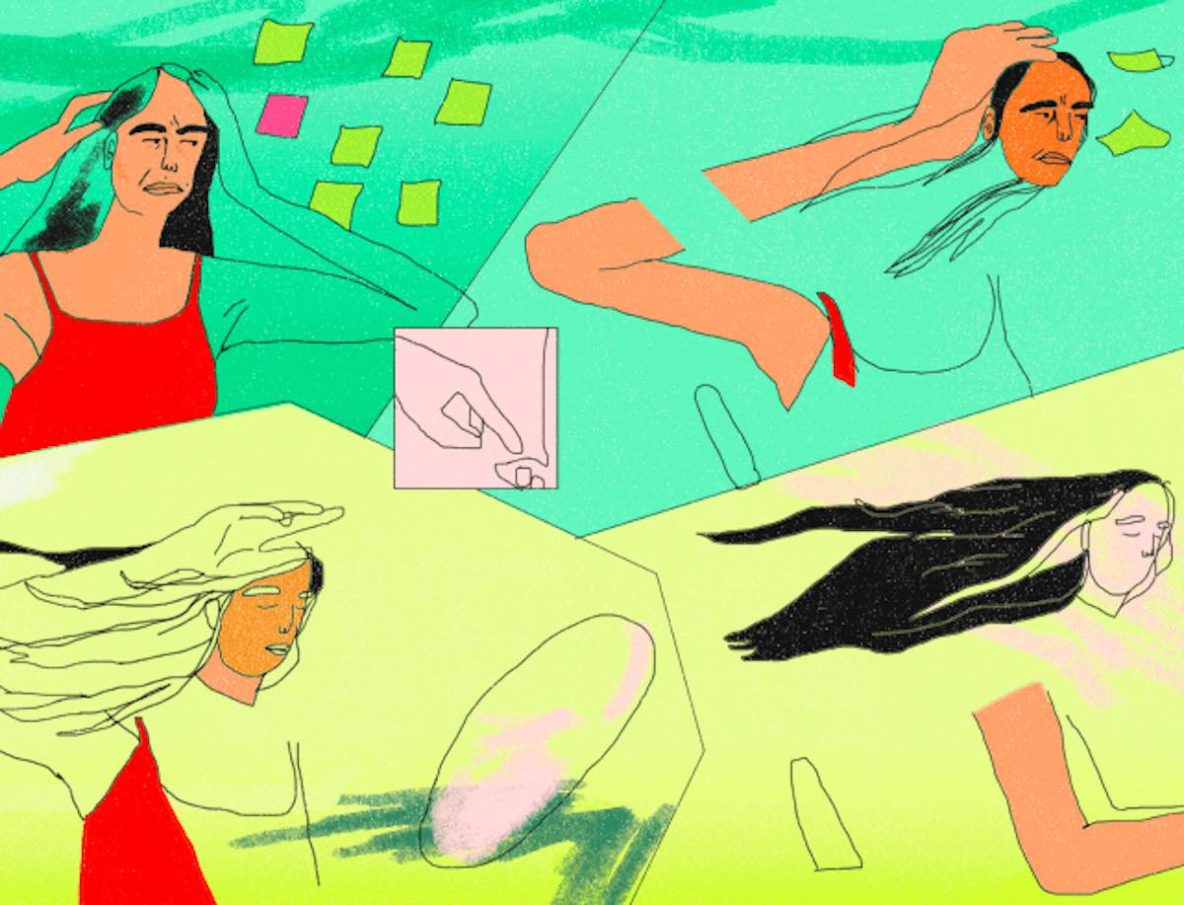 I’ve always sought comfort in familiar things. I rewatch the same TV shows. I reread the same books. I listen to the same songs for months on end. My routine isn’t about scheduling — it’s about having a shortlist of familiar activities. It feels as if I’m trying to escape my own spinning brain.

No two people with attention deficit hyperactivity disorder (ADHD) present the exact same way, but there are commonalities. The vast majority of adults with ADHD, for instance, aren’t hyperactive on the outside, but on the inside.

The moment my head touches a pillow, my brain starts doing somersaults. Intrusive thoughts rear their ugly heads. Remember when you made that girl cry in the sixth grade because you wouldn’t stop poking her? Remember when you said “shit happens” in that job interview? Oh, remember that time you drank too much champagne on a date and ran crying out of The Hunger Games?

Most often, though, it’s half-baked big ideas that turn my mind into a clown car. Ideas for work. Ideas for a new book. Ideas for the nursery for a baby who doesn’t exist yet. The world is full of endless possibilities to contemplate, and my brain has no idea where to put them all. They just tumble around in there like balls in a lottery machine.

In the ADHD brain, the team is short-staffed

Tuning things out is another formidable task. William Dodson, MD, an adult ADHD specialist in Denver, Colorado, writes in ADDitude that many people with ADHD have amplified senses, making it hard for us to block out stimulation. I hate shirt tags. I don’t like being touched unexpectedly. Loud music in the morning stresses me out. I turn my phone upside down on my nightstand so I can’t see the gently pulsing light as it charges. Ambient noise is my escape from nocturnal household sounds — ticking clocks are torture, and I live in fear of night-owl neighbors with booming baritone voices. Even in winter, I would sleep with an oscillating fan facing the wall until my husband bought me a white-noise machine.

I’ve developed good habits. I take medication. I make to-do lists every morning. My desk is plastered in sticky notes. I don’t play music while I work — I’ll just end up listening to it — but my trusty fan helps muffle the sound of my brain arguing with itself. I keep pages upon pages of overlapping projects. It’s not uncommon for individuals with ADHD to have trouble visualizing an entire task from start to finish. I pick up one thread, follow it for a bit, grab several more along the way, and before I know it, I’m holding a tangled ball of yarn. As I’ve grown older, I’ve developed the patience to occasionally pull a thread free.

Before I learned how to manage my time, deadlines would appear out of nowhere, and at the 11th hour I would find the motivation to churn out a final product in record time. I’ve often felt like the hare keeping up with the tortoise — aimless wandering punctuated by frantic spurts of focused energy.

I’ve learned to channel a common but counterintuitive feature of ADHD called hyperfocus. I sit down to work at 8:30 a.m., and suddenly it’s 3:45 p.m. Normally this only happens to people with ADHD when they’re doing something they enjoy, so it’s a good sign that I like my job. Of course, it also means that my house looks like it was hit by a tornado and I often forget to eat lunch.

When I do get out of “the zone,” all of my unfocused thoughts clamor for attention. The brain’s reward pathway has a built-in executive team in the corpus striatum, which helps filter the constant influx of thoughts and emotions and file them in their proper places. Some items should be addressed right away, some can wait, and many go straight to the trash. Occasionally, the team sends the single most important item on the agenda up to the prefrontal cortex for attention.

In the ADHD brain, the team is short-staffed. Everything — including the trash — goes into one big pile of equal importance. Dodson writes that stimulants work by providing support to the team — helping the striatum choose the single most important task, rather than half a dozen at once.

Yet there’s one thing ADHD brains are really good at: recognizing things they want to do and things they don’t.

Motivation is a chemical reaction. Ellen Littman, PhD, a clinical psychologist in New York, writes that the ADHD brain’s reward pathway is off-balance; it takes a lot more dopamine to make us feel happy or satisfied. Reward deficiency syndrome (RDS), a term coined by Kenneth Blum, PhD, makes it extremely difficult to muster the willpower to perform mundane tasks — even important ones — if they don’t pack a big enough dopamine punch. Novelty-seeking behavior is common. Some people with ADHD might become firefighters, drive recklessly, or abuse substances in their search for a boost. RDS is linked to procrastination and addiction, both common features of ADHD. Some might call it a lack of willpower. They’d be right, in a way, but it comes down to brain chemistry — not laziness.

Put simply, we’re the donkey, and dopamine is the carrot. The only carrot.

Yet not every ADHD brain is an adrenaline junkie. Littman writes that individuals with more hypersensitive ADHD may be living in a constant state of sensory overload. With so much stimulation and no way to compartmentalize it, these people might avoid crowds or loud venues. Many seek refuge in video games, where they experience dopamine boosts but have control over the amount of sensory input.

The world is full of endless possibilities to contemplate, and my brain has no idea where to put them all.

I seem to have feet in both camps. I’ll gladly jump off a cliff, perform CPR, ride roller coasters, visit new places, or drive a four-wheeler down a highway. But when the time comes to regain control over the level of stimulation, I extract myself and seek refuge in familiar, comfortable activities. Novel experiences during this time — Watch this YouTube video! Try ordering something fun for dinner! Take a different route home! — become less friendly, adding to a feeling of bombardment and stress. To escape the chaos and get my dopamine boost, I watch Lord of the Rings over and over again while I play Candy Crush. I work out to the same playlist of 20 songs. I play familiar piano pieces. I read Harry Potter for the dozenth time.

The psychology of ADHD makes sense of these behaviors. “People with ADD find various ways of self-soothing. It can [help] to have a routine and repeat it over and over again,” says psychiatrist Ned Hallowell, PhD, founder of the Hallowell Centers and author of Driven to Distraction. “They look to alter their inner state. I call that the ‘itch’ at the core of ADHD. Some of the most adaptive ways to scratch that itch are having a creative outlet, physical exercise, or close relationships. The maladaptive ways are compulsive activities, gambling, substance abuse, surfing the net, video games, those kinds of things.”

Sandy Newmark, MD, founder of the Center for Pediatric Integrative Medicine and author of ADHD Without Drugs: A Guide to the Natural Care of Children with ADHD, agrees. “A lot of kids with ADHD also have a sensory processing disorder…If they have the kind where they’re over-sensitive [or inattentive], that might be a reason to seek familiar activities…I can see how it would be soothing.” In my case, this behavior has carried itself into my adult life, which is not uncommon in ADHD.

The important thing to remember is that for people with ADHD in particular, every escape is also an entrance.

Despite the chaos, people with ADHD excel at the things we enjoy. We have a remarkable ability to channel our energy into creative pursuits — writing, journalism, music, design, teaching, freelance work. We are constantly tempted to escape the mundane and chase what makes us happy. With healthy habits, support, and good communication, this can lead us to incredibly fulfilling lives.

I like to imagine a world where more people chased what made them happy, instead of what they think they’re supposed to do. In that, I think we ADHD brains have it all figured out.