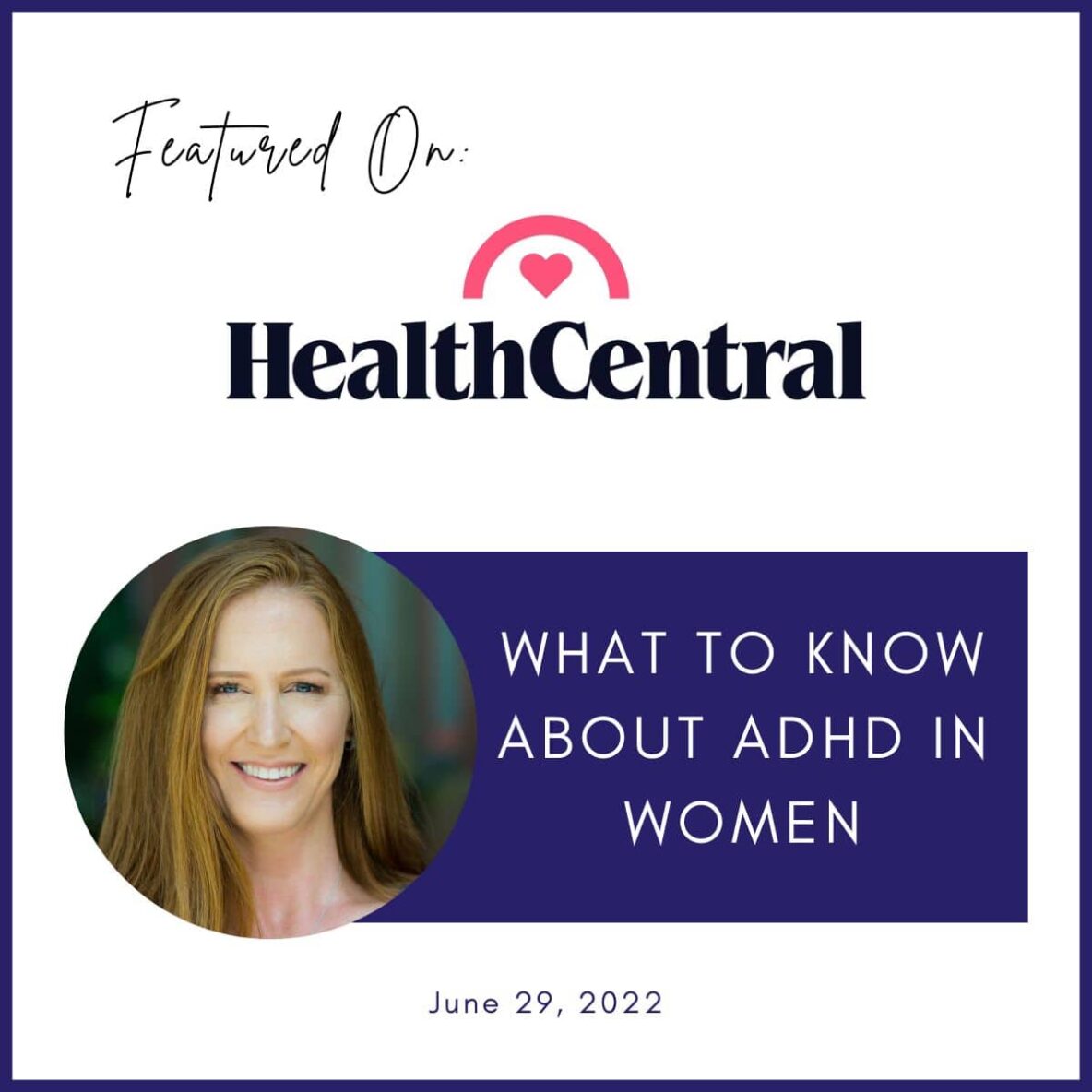 What to Know About ADHD in Women

Signs and symptoms of this condition are not one-size-fits-all. We asked the experts how ADHD may be different for women.

“Could it be ADHD?” Maybe you’re wondering about your daughter. Your wife. A woman at work. You might even be thinking of yourself.

The very fact that you—or your healthcare provider—are considering the possibility of ADHD in a woman or girl is no small deal. Twenty years ago, the idea might never have come to mind. “We basically thought ADHD was a male-dominated condition,” says Texas-based Dilip Karnik, M.D., a pediatric neurologist at Child Neurology Consultants of Austin.

Many still hold onto the ADHD (also written as AD/HD) stereotype of an 8-year-old boy, tearing around the house and wreaking havoc in the classroom. But as ADHD research has grown, so has our understanding of what this common neurological condition is—and isn’t.

“It is now recognized that ADHD is not just a boy problem but a girl problem, too. Girls and women just have different, less disruptive symptoms. That’s part of the reason they’ve been and still tend to be misdiagnosed and underdiagnosed,” says Karnik.

The reality: Boys are still diagnosed with ADHD at about twice the rate of girls (a far cry, though, from the five to one ratio of decades ago). “Females may have some protection genetically,” says Marcy Caldwell, Psy.D, director of Rittenhouse Psychological Services in Philadelphia and founder of ADDept.org. “But we still have a lot to learn about what ADHD looks like in girls and women. The more we understand, the more likely we’ll be to spot ADHD early and treat it effectively.”

What’s the Deal With ADHD Again?

Attention deficit hyperactivity disorder is a common neuro-developmental condition. Typically diagnosed during childhood, it affects about 8.8% of kids under 18 in the United States, and of those, about 60% experience symptoms that persist into adulthood. There are three basic types of ADHD:

Why Girls Go Under the Radar

A significant proportion of females discover they have ADHD when they are adults. “This isn’t because their ADHD is something new, but because their symptoms have gone undiagnosed,” likely since childhood, says Caldwell.

Research suggests this happens, at least in part, because girls are more likely to have the inattentive type of ADHD, while boys tend toward the hyperactive and combined types. The typical outcome? A girl daydreaming about sea turtles during math class is far less likely to be called out than a hyperactive boy chucking pencils across the room. “Teachers complain about disruptive boys to parents. Parents then take them to the pediatrician and get an assessment. The girls with ADHD may not get that attention,” says Karnik.

This isn’t to say that girls don’t get the hyperactive type of ADHD. A good number of them do. But symptoms may not be as obvious or intrusive. “Hyperactivity in a girl can be hyperactivity in her mind, which may race with thoughts and distract her from what’s going on,” says Billy Roberts, LISW-S, founder of Focused Mind ADHD Counseling in Columbus, OH.

Physically, a hyperactive girl may not flip over desks or push kids on the playground. But she may well pick at her skin and cuticles, tap her leg under the dinner table, or flit from one desk to another in class. “She might just get written off as too chatty,” Roberts says.

Other symptoms in girls with ADHD include:

A girl with ADHD might not participate in class to avoid interrupting or saying something inappropriate. Or she may obsessively check her backpack to make sure she hasn’t lost her house key. “This is where, for a lot of girls, perfectionism comes in. They feel shame about their struggles and think, ‘If I put 100% into every part of my life, people won’t notice my mistakes.‘ The irony is, they are often not messing up as much as they think they are,” says Roberts.

The Emotional Impact of ADHD on Girls

As years go on, struggling with ADHD symptoms can take a heavy emotional and social toll on girls. Self-esteem and self-image suffer as they face ongoing challenges in school and the relentless grind of masking their symptoms.

“These comorbid issues tend to come up in large part because girls are often unable to understand why they feel different or why they are having different struggles than other people. They internalize their pain and that results in other problems,” says Caldwell.

Even when parents suspect their daughter might have an issue, a healthcare provider may simply diagnosis the problem as anxiety or depression without considering ADHD as the possible root problem. “That’s why it’s so important to see someone who can put all the pieces together and not make a snap diagnosis,” says Roberts.

As adults, women who suspect they have ADHD may present the possibility to their healthcare provider. “They may have been feeling something’s been up for a long time. But it takes some reflection and assertiveness to make sense of those feelings and allow them to be seen,” says Caldwell. Sometimes, a mom might have a child who is being assessed for ADHD and see mirror symptoms to their own lives, Caldwell adds.

It’s common, too, for women to hit a wall as life gets bigger and more complicated. Work may take a hit. Bills might not get paid. Kids may languish at soccer practice when no one shows for pickup. “The truth is, men don’t take on as much of the childcare and the household and are not playing as many roles on average,” says Caldwell.

While the actual condition doesn’t change as girls become women, the way symptoms manifest themselves might, says Caldwell. For example, a young girl with ADHD may have had trouble maintaining friendships; as a young woman, she may now have difficulty sustaining a romantic relationship. And a girl who couldn’t finish tasks in school may find in adulthood, she quickly loses interest in jobs and moves from one gig to another.

Other common signs and symptoms of ADHD in women include:

Then, of course, there are hormones. Their fluctuations over the month and over a woman’s lifespan impact just about everything—including ADHD. “In the latter two weeks of a menstrual cycle, as progesterone levels increase, ADHD symptoms get worse,” says Caldwell.

The good news? There is no age limit for getting help. “I talk to a lot of women who are getting diagnosed in their 40s because the drop in estrogen during perimenopause is making their symptoms much more noticeable. I think this applies across the board for a lot of women when hormones change. Even those who are diagnosed and getting treatment may need more support at these times,” says Meredith Carder, an ADHD coach and mom living with ADHD in Phoenix, AZ.

Treating ADHD in Women and Girls

ADHD treatment options for women are virtually the same as what’s recommended for men. What may be different is how these therapies are applied and prescribed, at least in part because fluctuating hormone levels can impact symptoms and blunt the effectiveness of certain medications.

The most effective treatment for ADHD is “multimodal,” meaning it attacks symptoms from a number of angles and disciplines. Some options your doctor might discuss with you include:

There are several recent innovations in prescription drugs for this condition, as well as some that have been on the market a while.

Nonpharmaceutical intervention can be an effective way to combat symptoms for some women with ADHD.

Sometimes more useful for girls at younger ages, learning to spot and manage ADHD-related behavior can keep kids from feeling ostracized by their peers.

For young children, behavior management is often more about training parents than it is about training kids. A number of programs teach parents to help their kids develop essential coping and practical skills.

The Future of ADHD in Women

Is it because we’ve made so much progress in identifying the condition in women? Or is ADHD getting too much hype? “Whenever we have a course correction, which is happening with ADHD in girls and women, there is a little bit of a pendulum swing for sure,” says Caldwell. “But if you look at large scale numbers, we are nowhere near an overdiagnosis issue now.”

Increased awareness, assessment, diagnosis, and treatment of ADHD is a step forward for women, experts believe. “After diagnosis and appropriate management, I’ve seen girls who had been silently suffering and struggling for years become highly successful students and go off to medical and law school. Their anxiety and depression often go away completely. Treatment, without question, can change your life,” says Dr. Karnik.